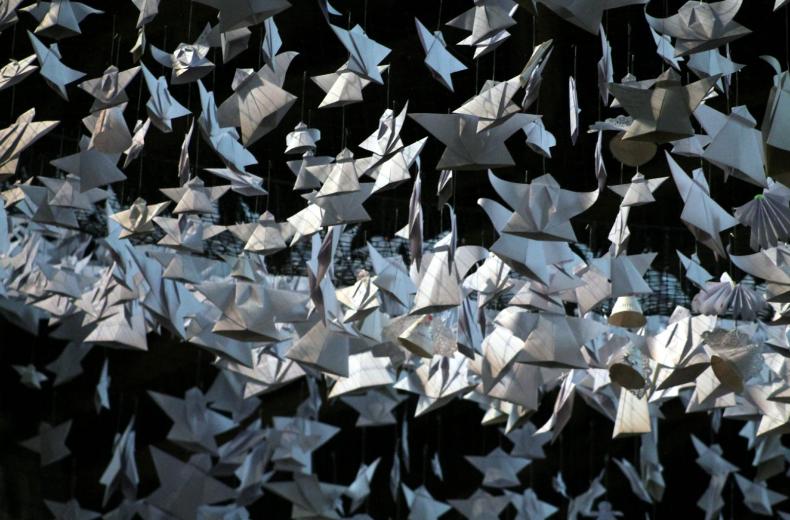 Our On Angel Wings installation will be available to visit during Abbey opening hours and is free to visit and dedicate an angel. More information can be found below.

On Angel Wings is an installation that came into being following discussion on how we could offer the community a space to commemorate those who had been affected by the COVID-19 pandemic.

As we slowly reopen following a turbulent 2020 and start to 2021, we realised people had been affected by this in more ways than we ever could have originally anticipated. What we wanted, was to provide people with the opportunity to be awed and provoke thought as well as allowing people an outlet; somewhere to palpably show their appreciation and respect.

Inspired by the installation in 2020 by our friends at Ripon Cathedral 'On a Wing and a Prayer', angels seemed like the perfect way to honour those who had served relentlessly throughout, those who had lost their lives, those whose lives had been disrupted and those who had fought to get through one of the toughest times they had known. An idea was devised to hang origami angels, each with dedications to loved ones, in the Abbey; therefore each angel representing someone or a group of people precious and cared about by someone else.

We contacted the Verger at Ripon Cathedral to help with the logistics of how we could go about hanging multiple thousands of origami angels in a 1,300 year old building, which had not had ease of access to the rafters built into planning and design! After much deliberation and consultation of architects, conservation engineers, rigging teams and planning committees, we realised this was a real possibility and the plan was put into action!

The resulting project is 'On Angel Wings'; 4,500 origami angels, made by local schools, volunteers, Abbey staff and members of the public, suspended 45ft high in the Chancel of the Abbey. The angels stretch right to the High Altar from the start of the Old Choir Stalls and are lit from the sides. The angels are high enough that dedications can't be read from the ground; keeping those memories and thoughts private but still present; much like a prayer.

On Angel Wings is open to visit any time during Abbey opening hours:

There are still origami angels in the Abbey for those who wish to make a dedication. We will do our very best to have these suspended with the other angels as often as our Verger can make her way up to clerestory level of the Abbey.

There is no charge to visit or dedicate an angel, but donations are welcome for the two charities the installation is supporting; Tynedale Hospice at Home and Great North Air Ambulance Service.

As an Abbey, we received funding via the Culture Recovery Fund to support in the huge costs involved in the curation of this project and therefore want all donations to go to the two partner charities. There is a contactless donation point available in the Abbey, just select 'On Angel Wings' on the screen and we will ensure your donation goes to the right place.

Live Streaming of Services
We are pleased to tell you all we have now had live streaming equipment installed in the Abbey! ...
Update to midweek Choral Evensong Services
Updates on midweek Choral Evensong services following new government guidance.
The Northern Saints Trail - The Way of Light
The Abbey is pleased to have been noted as a venue of significance on the Northern Saints Trail, ...
Support Us