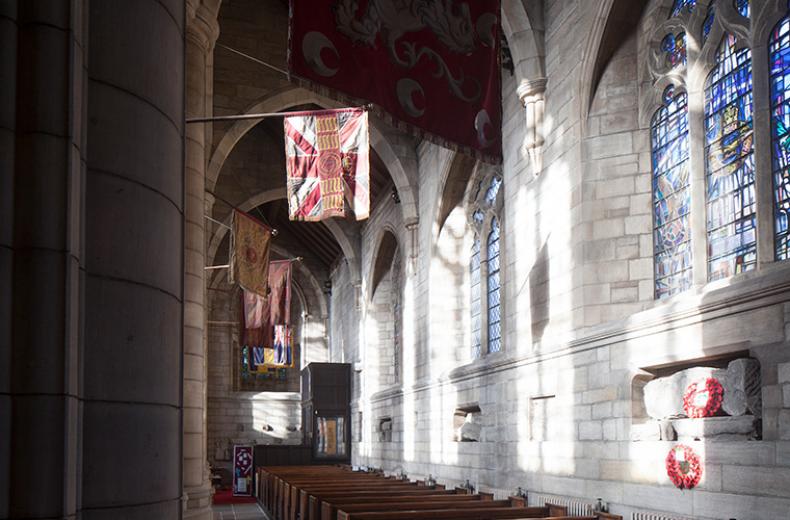 The nave aisle of Hexham Abbey is home to an impressive and moving collection of banners, marking some of the most important events, regiments and people in the history of Northumberland.

The first of the banners, furthest to the east, is the Hawick Banner. This commemorates a raid by Lord Dacre, Bailiff of Hexham, along with a number of Hexham men, into Scotland in 1514, the year after the Battle of Flodden. The Priory flag was captured by the Hawick Callants, a group of youths who bravely defended the Scottish Borders town. The flag was appropriated by Hawick, and the initials ‘H C’ and the vertical line were added to it.

The banner on display is a replica presented to the Abbey in 1972 by the Provost of Hawick, as a token of the friendship established between the two communities. The same colours are carried in the ‘Common Riding of the Marches’, an annual event in Hawick which marks the raid of 1514.

At the far end of the aisle are four standards of the British Legion. The oldest of these is the one in the glass case. This dates from the 1920s, when the Hexham Branch was formed. It was originally housed in the old War Memorial Hospital, and was moved to the Abbey in 1995.

The three other banners are those of the Women’s Section of the Hexham Branch, a Hexham Branch Banner hung here in 2000, and the Northern Areas, Northumberland County Banner, hung in 1975 when a new standard was dedicated.

On the formation of a new battalion, a ‘pair of colours’ is consecrated - the Sovereign’s Colour, an emblem of loyalty and patriotism, and the Regimental Colour, a symbol of local loyalty and self-sacrifice.

Traditionally, when old colours are superseded, they are deposited in a church, and Hexham Abbey is home to two pairs of regimental banners, one pair belonging to the Scots Guards, the other to the 4th Battalion Northumberland Fusiliers.

The Scots Guards Colours were presented to the 2nd Battalion by Edward VII in 1903. Colonel Gerald Cuthbert of Beaufront, as colonel of the regiment, chose Hexham Abbey - ‘where he had worshipped as a boy and his father before him’ - as their resting place.

The colours of the 4th Battalion the Northumberland Fusiliers were presented in 1920. The Regimental Colour includes an attractive wreath of roses, shamrock and thistles. Below is a garland of red and white ribbon. The King’s Colour has the Union Flag with the regiment’s name round the Roman numeral IV in the centre. The colours were laid up in the Abbey in 1979.

Like his ancestors, the 2nd Viscount Allendale (1890-1956) was Lord of the Manor of Hexham, and had a close association with the town. He was a Lord-in-Waiting and Steward of the Jockey Club. His father had presented the Sele park to the people of Hexham, and his grandfather had been involved in the rebuilding of the east end of the Abbey, and the development of Beaumont Street.

Viscount Allendale's standard features a white lion rampant and eight white crescents on a red background. It was brought to Hexham Abbey from St. George’s Chapel, Windsor in 1959.

The Banner of Sir Percy Loraine

The black and white banner is that of Sir Percy Loraine (1880-1961), who became 12th Baronet of Kirkharle in 1917. He served as British High Commissioner to Egypt, and British Ambassador in Turkey and then in Italy.

In addition to the black and white cross on this banner, there is a red hand, the symbol of Ulster. This is borne on the arms of all baronets.

Sir Percy owned Styford Hall in Stocksfield. He asked that his banner be hung in Hexham Abbey when it was removed after his death from the chapel of the Order of St. Michael and St. George in St. Paul’s Cathedral.