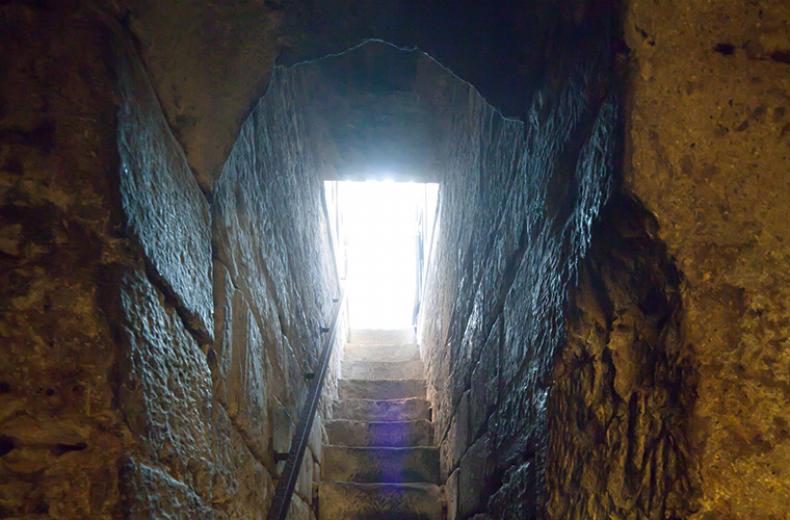 For many visitors to Hexham Abbey, the greatest thrill of all is the Anglo-Saxon crypt. Beautifully preserved and largely unchanged in 1,300 years, the crypt is the only part of Wilfrid’s original church that survives intact.

Wilfrid was so inspired by a visit to Rome that he returned to Northumbria determined to build stone churches like the ones he had seen on the Continent.

Northumbrian craftsmen lacked the skills to work with stone, but a ready supply of building material was close at hand. A few miles down the river, at Corbridge, were the remains of a major Roman fort and town, and Wilfrid's church was probably built entirely from stones taken from this site.

You can see the results of Wilfrid’s impressive recycling project everywhere you look in the crypt: there are well-defined frieze patterns in some areas of wall, as well as an attractive leaf and berry design on some of the stones, indicating that they were originally from an important house. There are also two inscribed stones in the roof, one dedicating a granary, the other a fragment of an altar to Maponus Apollo, a merging of a Celtic god with a Roman one.

In taking the steep stone steps down to the crypt, you are taking a journey back in time to the earliest days of Christianity in England.

Entry to the Crypt is free of charge. It is open to visitors daily, when services and events allow. Please speak to a steward or verger if you would like access.