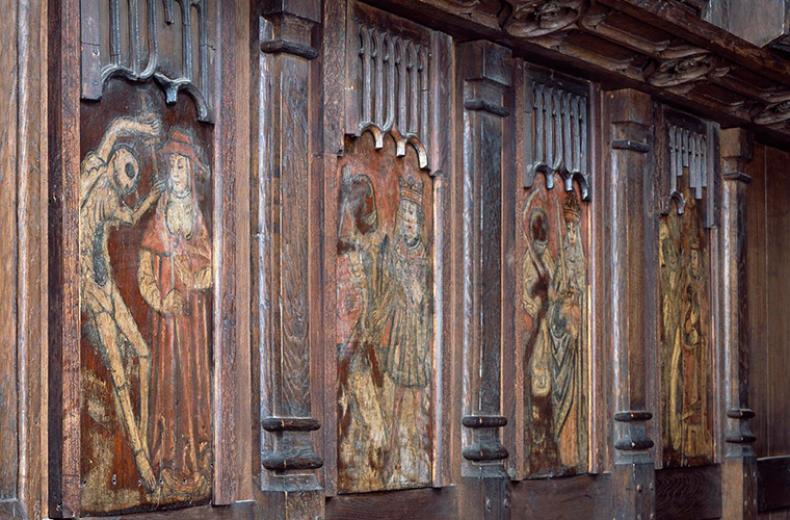 Hexham Abbey is home to a fascinating and beautifully-preserved collection of medieval paintings in the form of screens and panels, rare survivors of the destruction suffered by so much church imagery during the Commonwealth period in England.

At the west end of the Choir is a magnificent Rood Screen, dating from the late 15th or early 16th century. The word 'rood' is Old English for 'cross', and there would traditionally have been a huge cross mounted above the Rood Screen, where the organ now sits.

The Choir side of the screen features paintings of saints, including St Oswald, St Etheldreda and St Andrew. A passageway that links the Choir to the Nave has richly painted ribbed roofwork. It also contains two of the most beautiful paintings in the Abbey: the Annunciation, and the Visitation of Mary to Elizabeth.

On the Nave side are sixteen delicately canopied niches with paintings of the bishops of Hexham and Lindisfarne. They combine exquisite woodwork and fine painting, and were obviously made by highly skilled craftsmen.

In the chancel, near the Leschman Chapel, is another fascinating collection of 15th century painted wood panels. It is made up of three distinct series. The first consists of a lectern with a decorated screen, along with fourteen panels showing images of Christ, the Virgin and the Twelve Apostles.

Above this set of panels is another, featuring four scenes of the Dance of Death. They show Death as a gruesome skeleton wielding a sickle. He dances, in turn, before a cardinal, a king, an emperor and a pope. This was a common medieval theme, emphasising the irrelevance of rank and power in the face of universal human mortality.

The top row of panels makes up the Reredos, which would once have hung over the altar. It shows seven of the canonised Saxon bishops of Hexham. Each of them is set in a niche with a decorative carved canopy above it.